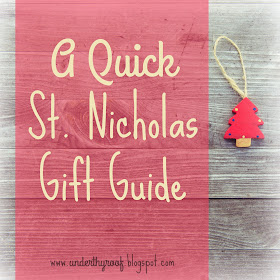 St. Nicholas Day is on the horizon!

In our house St. Nicholas is the first Big Deal Feast of winter. We put up our stockings on the First Sunday of Advent and await the arrival of St. Nick on December 6th.

But what to put in those stockings? Here are the three things I normally include:

Yes, I give my kids band-aids as a present. You should see the excitement caused by Disney Princess band-aids!
The kids can use the band-aids however they want, provided they only go on their own bodies. Not in your sister's hair, on the walls, floors, or as "armor" on the baby's arm. (I have reasons for my rules. So many good reasons.)

Sometimes I get chocolate coins, but I find the toddlers give up trying to peel them and just end up eating the foil. Now I mostly get really cheap Halloween candy.

We've done waterpaint books, an Uno game, mini-puzzles, and small balls as the toy gift. Normally these come from the dollar store or the clearance section and they have always been a hit.

Now that my kids are getting older, and there are more of them, I like the idea of having a larger shared gift.

My little kids LOVE their My Little Church Magnet Playset from Wee Believers. They are only allowed to play with it during mass, provided they take turns nicely. This will entertain a preschooler through most of a homily! 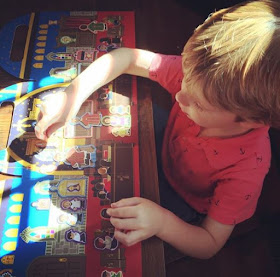 For older kids, I love this Magi Ornament Sewing Kit. The ornaments could be put to use as the traveling Wise Men for the 12 Days of Christmas or just hung on the Christmas tree. This My Pop-Out Nativity would make for a good first Nativity scene if you are short on space. If you want to use any of these ideas, Wee Believers sent me a discount code for you to use! KIRBY30 will get you 30% off your entire order.

I pop Overnight Cinnamon Rolls into the oven when we wake up, and they are normally about ready for icing by the time everyone has finished exploring the contents of their stockings. Later in the day we'll read books on St. Nicholas and watch the CCC movie Nicholas: The Boy Who Became Santa.

Simple enough of a celebration to fit into a school/work day, but special enough to stand out for the kids. The magical happy place of liturgical living!


How do you celebrate St. Nicholas Day? Is it a big deal in your house?
Kirby at 1:36 PM
Share